The post-war era in the United States was a boon for suburban residential development. Returning soldiers were looking to settle down and start their own families in peacetime. This was the era of tract lot housing spreading across the nation with the three associated traits: quick, cheap, and fast. And often low and flat as the personal automobile led to dispersed suburban communities.

Southern California offered geographical advantages--where else could you find plenty of sun, a temperate climate all year round, and no need to shovel snow? These favorable conditions spurred a homegrown style catering to the climate and locale. Out with the heavy revival and classical styles and in with mid-century inspired by early 20th century modernism and newfound optimism in postwar America.

Mid-century design and California pair together like peanut butter and jelly. Or perhaps more fitting for the Californian palate: wine and cheese.

For many homeowners in California that gravitated towards mid-century design, they are likely to be sitting inside a California Ranch style home designed or inspired by Cliff May. Take a drive around town now and many of his buildings are still standing today as he was quite successful having completed over 18,000 houses. Some in their original condition, some contemporaized to fit the present, but the low-pitch roof with an open floor plan emphasizing a seamless connection to the outdoors is still the central part of every house. Why change what is not broken?

Our client's came to us after purchasing an original Cliff May house in Long Beach. The restoration of this home is conscious of the existing conditions which remained close to the original specifications. It does not introduce anything grandiose to make itself more prominent to the street or neighbors. No new additions, no major demolition, no structural concealment. The clients wanted to restore and maintain the inherent beauty of this house as it stands and afficionados of mid-century architecture are all the better off for their decision to preserve living history. 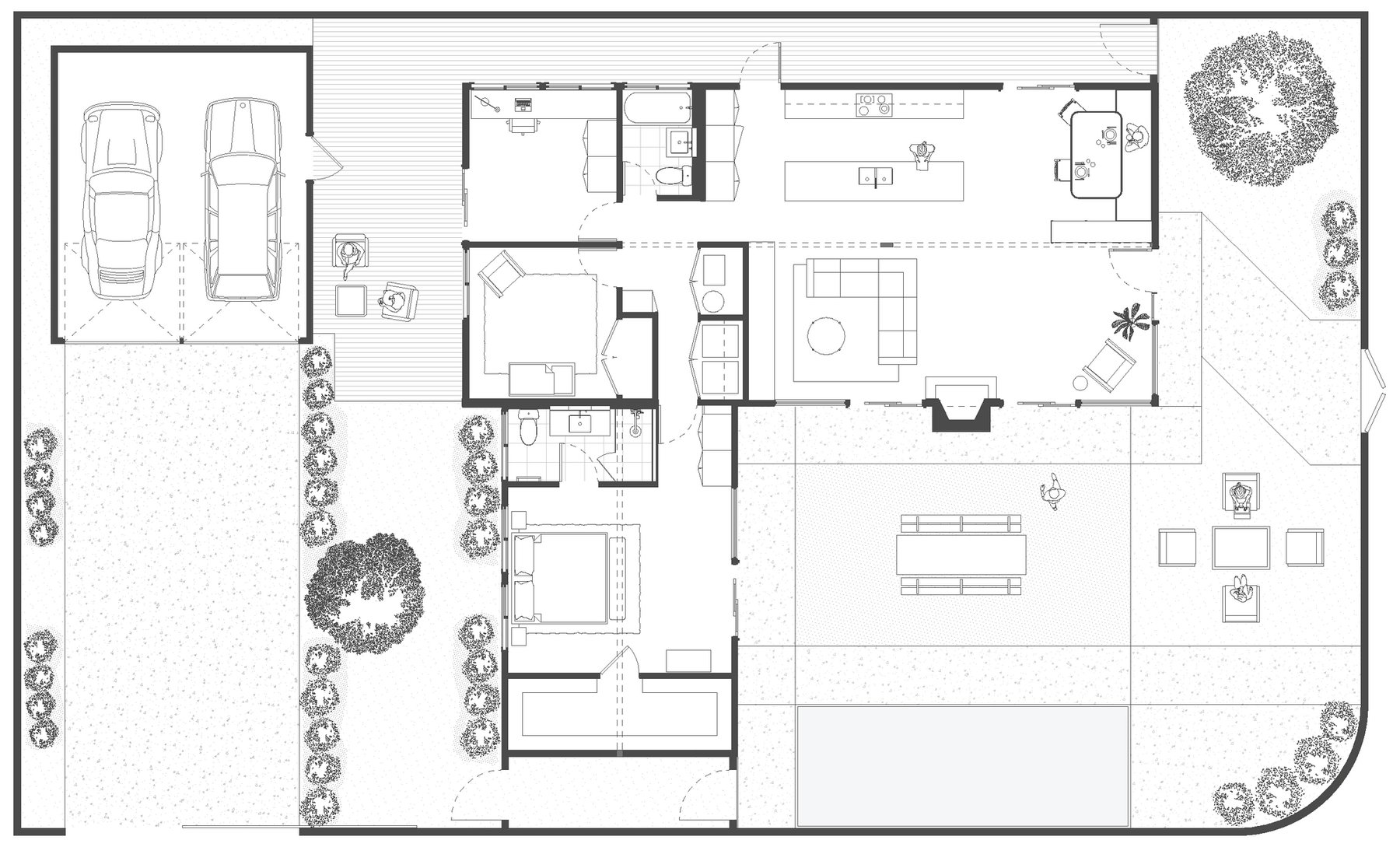 The roof framing remains exposed with a new coat of warm off-white paint standing in subtle contrast to a clean white paint on walls and ceilings. Oak cabinetry and granite give the original worn out veneer kitchen and melamine counters a contemporary rejuvenation. The floors were stripped of years of layered tile and laminate, exposing the original concrete foundation which has been ground and polished. Brass fixtures and hardware complement the warmth of oak and avoids the futuristic Jetsons shine. 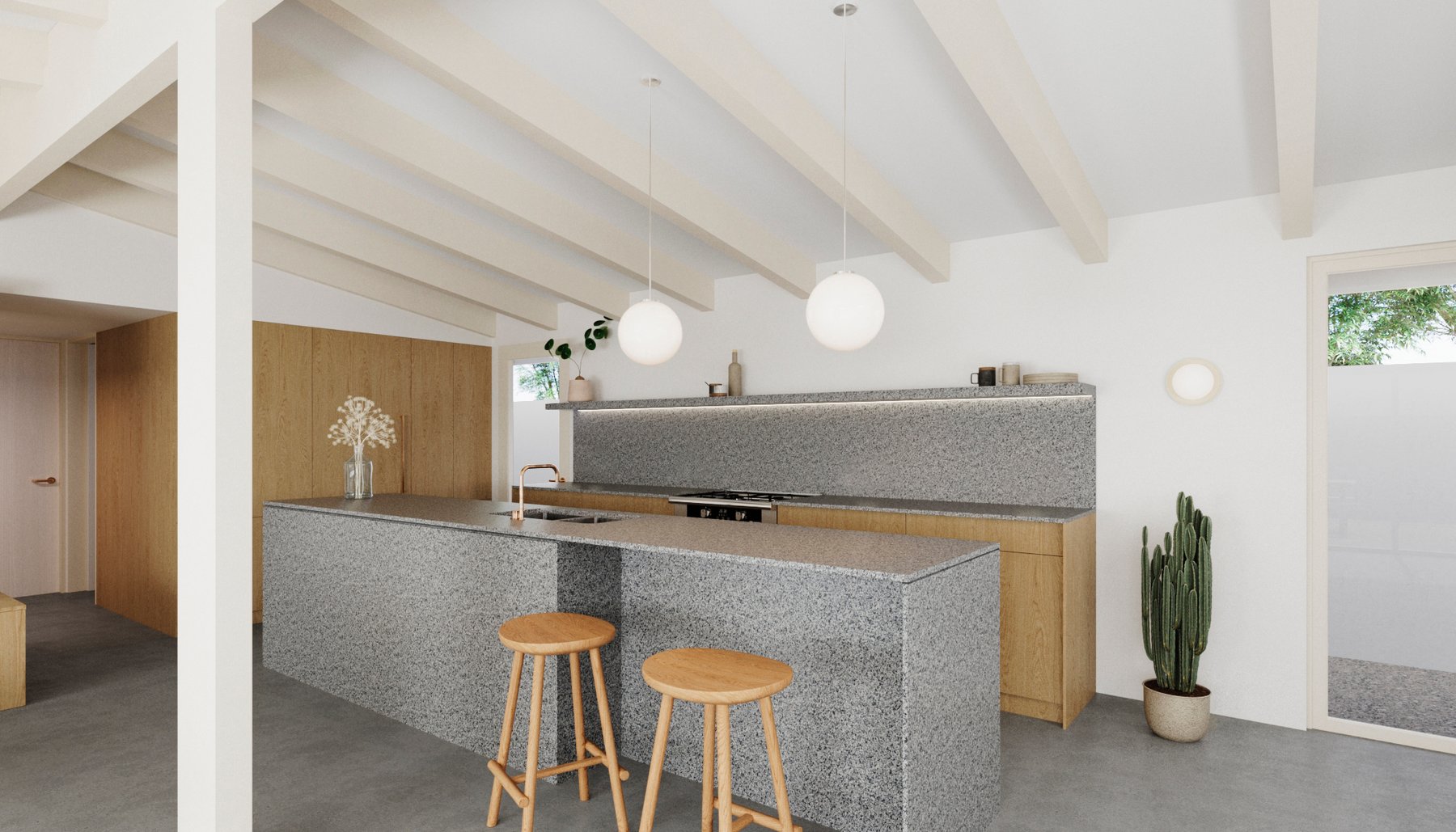 May's vision of a mainstream mid-century home highlighted the importance of an approachable homey aesthetic alongside the clean lines and materials of modernism.

Delving into Cliff May's ranch style, the original house design is simple yet homey. He rejected modernism's coldest materials like steel and substituted familiar materials like board-and-batten siding and cedar shake roofing (this roof is asphalt). And a sloped roof instead of a sharp flat one with a generous overhang so that one can open the doors even during those rare bouts of rain. May considered these little details not for style points but to inspire a better way of living - and our intention was to preserve these details.

Architectural styles do evolve over time and adapting to current times may bring new benefits and welcomed changes.

But they also blur original intent and sometimes ignore or erase what came before without providing a better alternative. Why is it that many homeowners seek an original mid-century ranch style residence? One can build or find an inspired contemporary home just as easily. Perhaps there was something personal and honest, even magical, from this particular time period that entices potential buyers and avid fans. An original Cliff May is an original, there are no others even if these homes were picked from a catalog.

Continuing into the private bedrooms and bathrooms, the same subtle restorative palate is applied. The main bathroom is paired with a light neutral scheme while the guest bathroom is infused with pastel green tiles and a warm terrazzo counter. A spark of color, a splash of vitality.

Half a century later and Cliff May's humanist design ethos stands as strong as ever. A shortened distance between natural and constructed space will be highly desirable as the global workforce look to ditch commutes and cubicles for work-from-home setups. Outdoor space close to home is important for peace of mind, better yet when the only separation is a thin sheet of glass within arm's reach. This physically and spiritually close connection to the outdoors captured under a low-slung roof is May's lasting legacy.